Prudent Pet loves dogs. And we love people who love dogs. So it makes sense that we partnered with our friends at BarkBox to review some of their legendary Halloween toys and treats.

BarkBox was kind enough to send us our own themed box for our pups to enjoy. Many of our dogs are already familiar with their legendary toys, but nonetheless we were excited to give them a try. 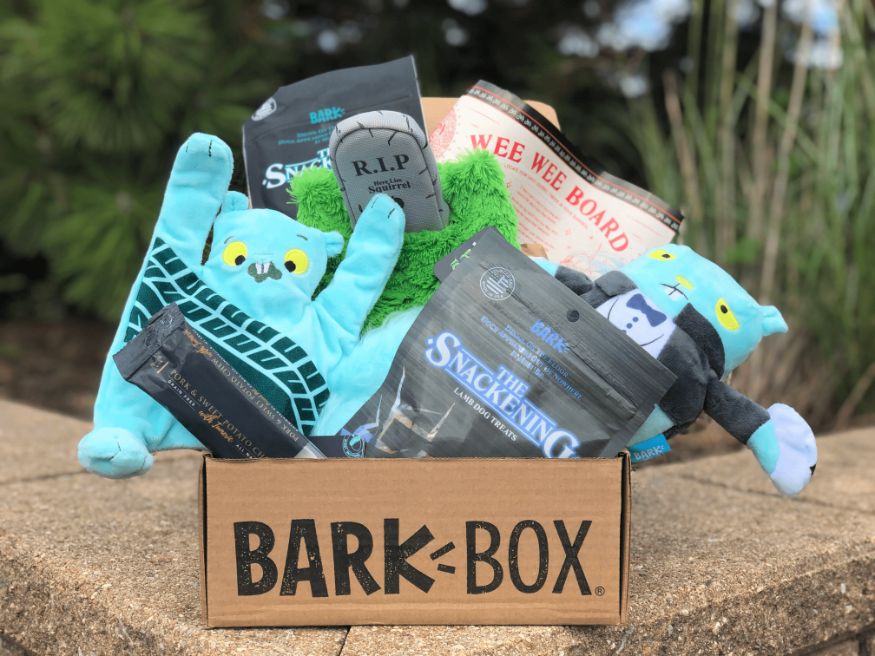 Prudent Pet team members Jenny, Will, and Brittany decided to split up the box and let their pups, of varying sizes and destructive tendencies, review it for themselves. Then they jotted down their thoughts on these Halloween toys from past and present BarkBox deliveries. 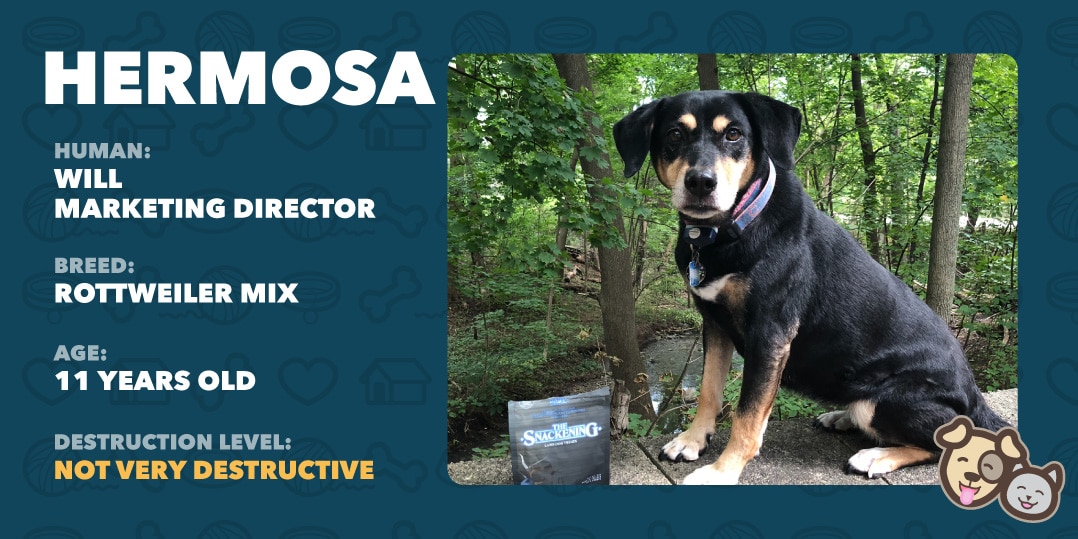 If I had to choose one word to describe Hermosa it would be “chill”. Being destructive just isn’t in her nature, so I wasn’t too worried about her destroying a plush toy like Scurrymore the Butler Ghost.

Hermosa enjoyed running around the house with Scurrymore for a while. Then she decided she was done playing and dropped him. She ended up gifting Scurrymore to her little human sister who enjoyed playing with it a bit more.

I guess Hermosa just isn’t into hauntings. At least I know if her interest ever piques again the toy will hold against her gentle playing. We would definitely buy more toys from Bark… probably for our daughter, not Hermosa.

I’m not surprised that Hermosa showed more interest towards the treats than the toy. She’s still pretty food motivated, even as a senior dog. She followed her sister around for a while and snacked her way through most of the bag in one day. Hermosa wanted to make sure I stressed her intense love for these pork treats in our final BarkBox review.

You can tell in the pictures Hermosa is pleading to stop the photoshoot so she can unleash The Snackening. 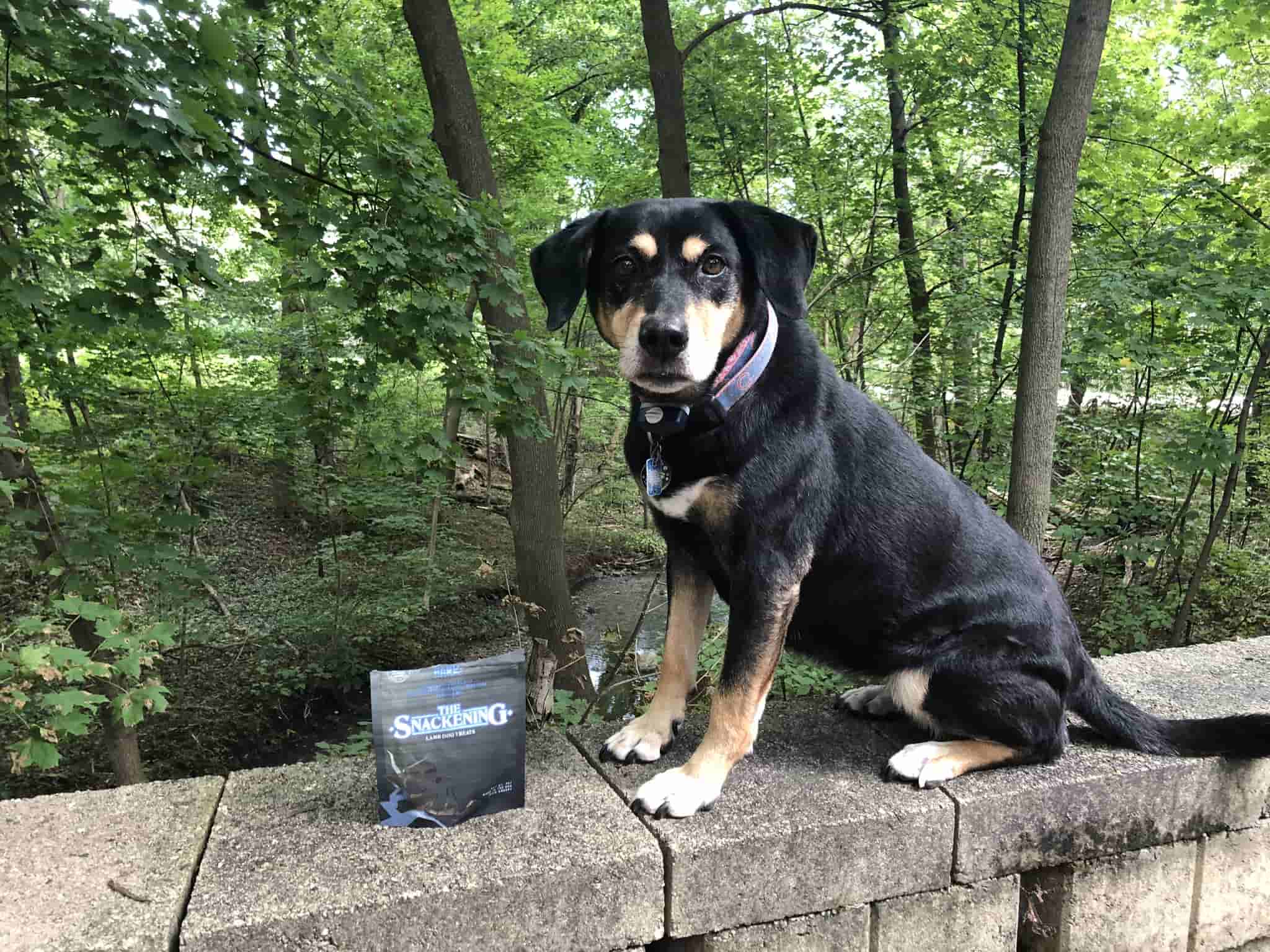 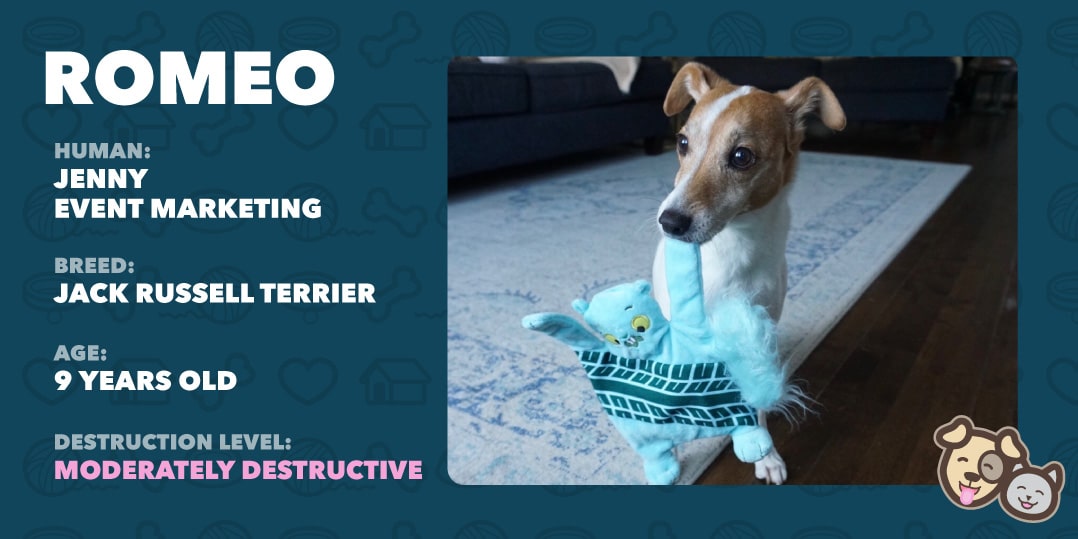 Romeo is a major momma’s boy and kind of a scaredy cat (can we make an equivalent term for dogs?), so I was actually kind of surprised he wasn’t afraid of the squirrel ghost. He can be very particular about toys but Romeo clung on fast to the squirrel roadkill. It must be because he’s an only child.

Romeo is usually super gentle but is becoming a little more destructive in his old age. He’s not too much of a monster, but he did manage to rough up his new pal a bit after some playtime. He gets really excited about the crinkle the toy has to it.

I don’t think Romeo plans to give up his Ralph plush. At least I know what to get him for Christmas!

Disclaimer: I’m always hesitant to give Romeo new treats or food. He has an incredibly sensitive stomach and is on a very strict diet. I only feed him limited ingredient salmon-based food from RAWZ with a turkey and salmon bone broth from Honest Kitchen.

I decided to only give him a small bit of the chew stick to see how he reacted to it. It did end up bothering his tummy so I probably can’t continue to give him this treat. The chew stick has great ingredients and I normally have no issue giving dogs pork or sweet potato, so I won’t dock it points for this BarkBox review. Romeo’s picky stomach just couldn’t handle the change.

Despite the upset Romeo still begged for more of it. I guess pleasure is pain! 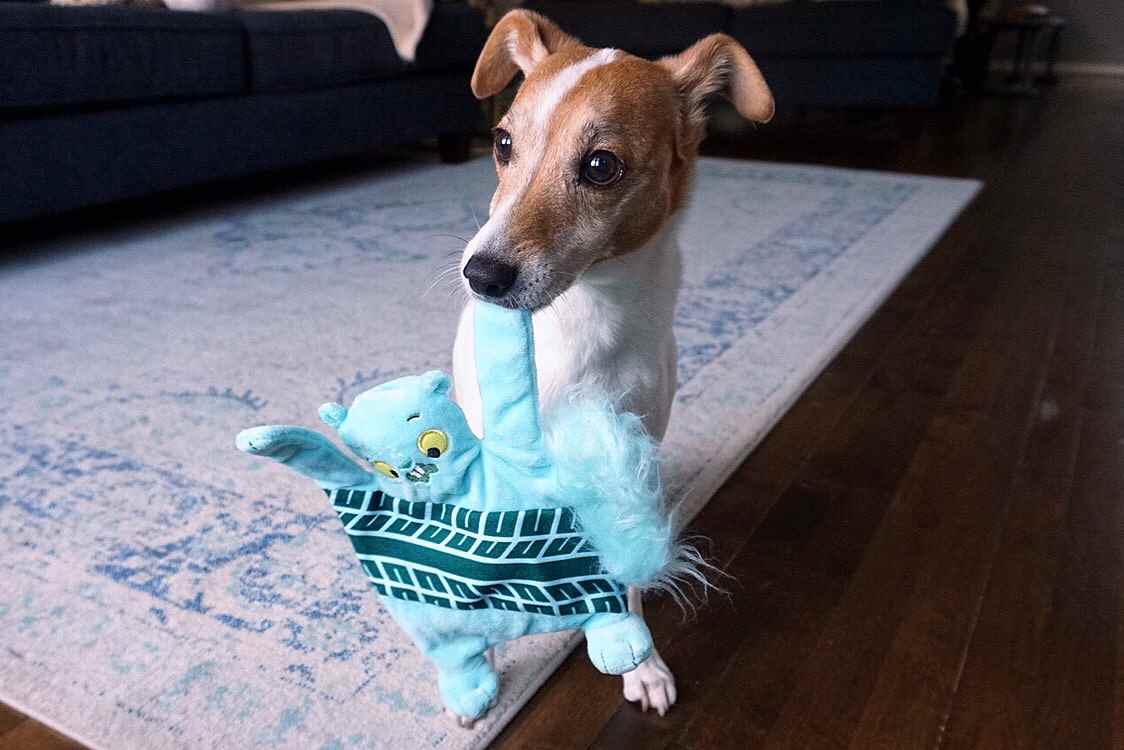 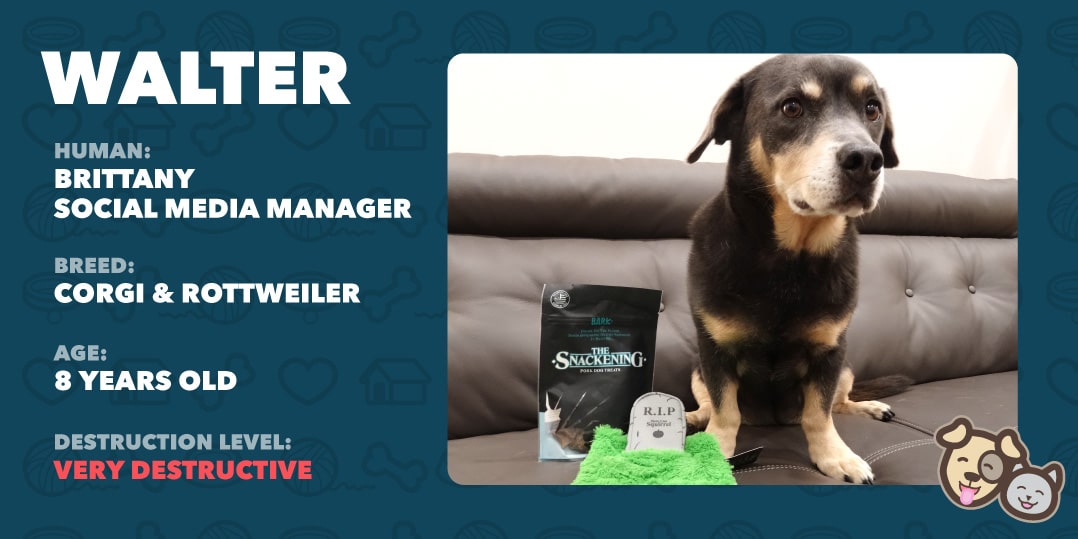 I first introduced Walter to the RIP Squirrel Plush Toy. There was no logic behind this, he just managed to grab it from me first. At first he didn’t care for it (he started chewing on the paper tag) but after I ripped it off he focused his attention on the many squeakers in the toy.

Walter is a known destroyer in my house and has even managed to demolish some nylon bones. However he has not yet totally ruined the squirrel graveyard (and trust me, being purposefully delicate is not in his nature).

It’s pretty adorable how possessive Walter is about his little toy. He hides it from his feline siblings (for the record: cats have no interest in it). But I must admit it’s slightly frightening how happily Walter dances on the grave of his enemy.

I had no doubts Walter would like these treats. He’s very food-motivated. The first few I gave him were swallowed whole so I know he didn’t even let himself enjoy it.

Once he calmed down I gave him some more and he definitely enjoyed them. I made the mistake of leaving the bag on my coffee table and returned to what can only be described as a Snackening crime scene. Treats all over, Walter nose-deep in the bag, and the package completely demolished.

Will I buy these treats again? Yes. Will I need to keep them locked up? Absolutely. 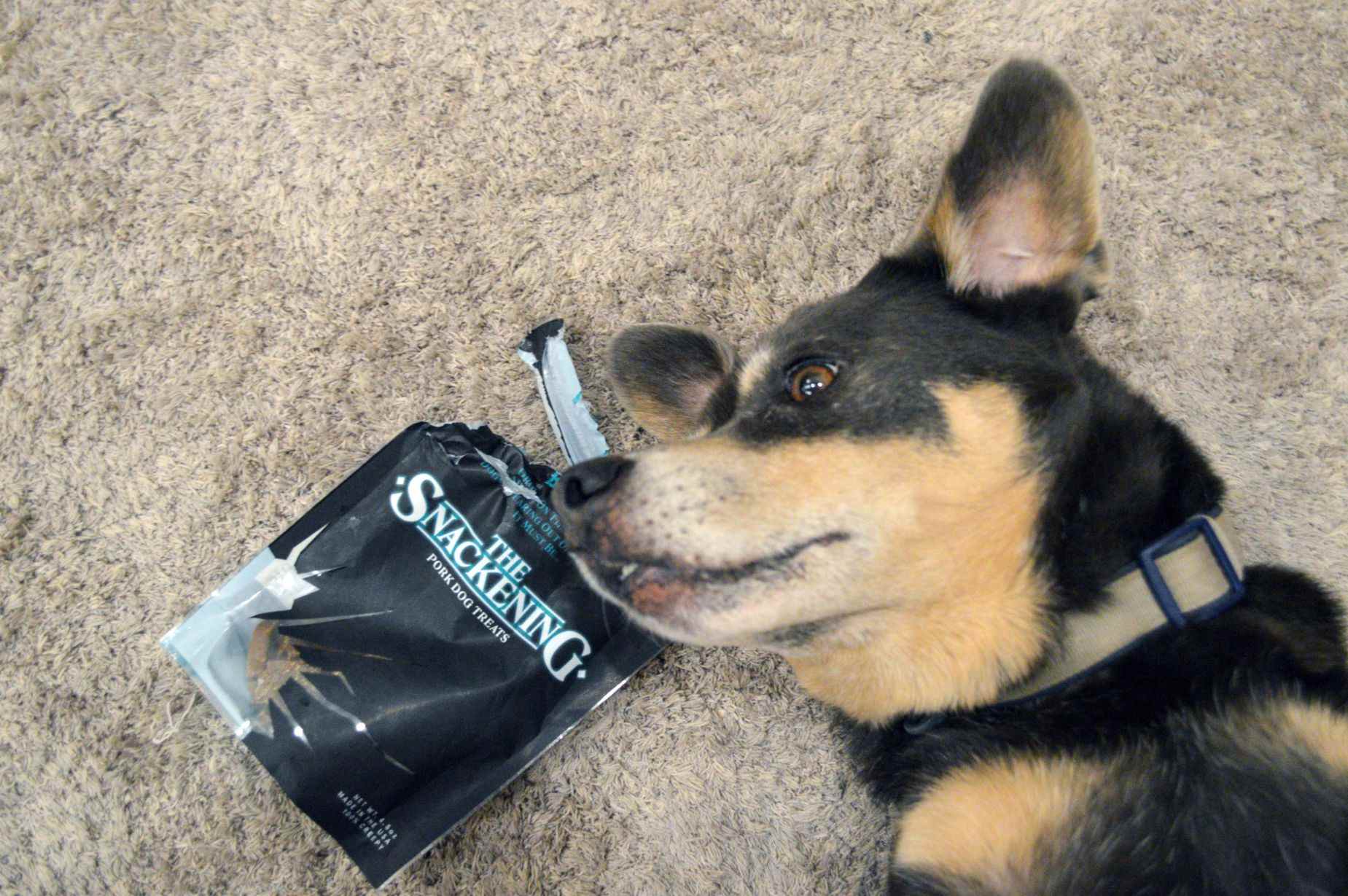 Overall, the Prudent Pet team gives these BarkBox toys a 4.7 out of 5 paw rating! Even our pickiest pups enjoyed the assortment of toys and treats our friends at BarkBox sent us.

This BarkBox review is complete — and the Prudent Pet dogs are begging for another one!

Do you have a BarkBox subscription? What do you think of these toys? Drop us a line on our Instagram and tell us what you think! 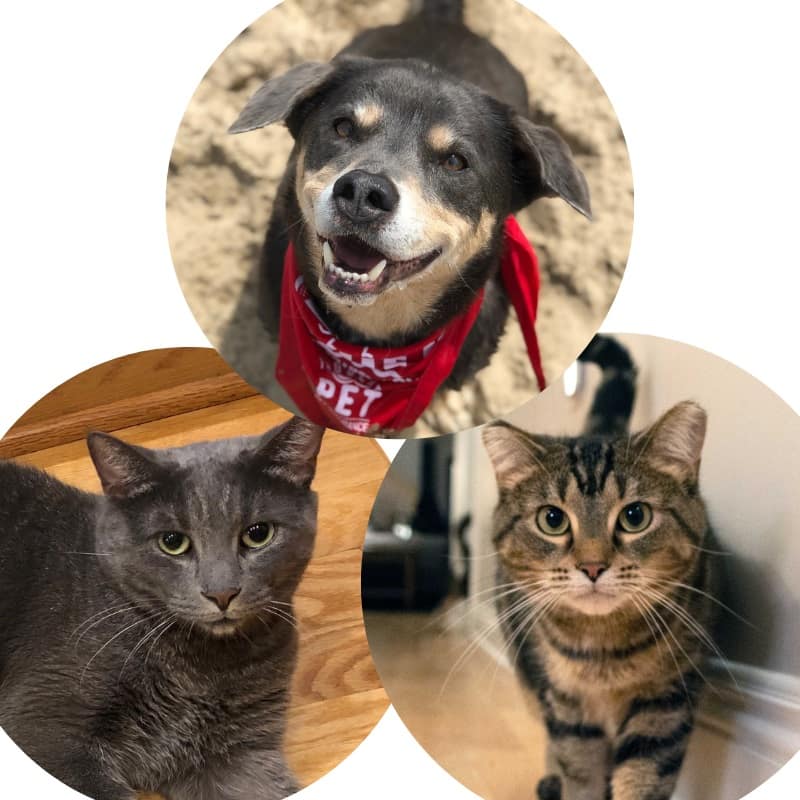