How to Celebrate National Take Your Dog to Work Day

How to Celebrate National Take Your Dog to Work Day

Mark your calendar, tell your pup he’s a good boy, and get ready for some double-holiday fun. That’s right: Take Your Dog to Work Day and National Dog Party Day are celebrated together on June 21st.

Studies show that bringing your pet to work increases productivity – probably because pups make great assistants. So ask, beg, or double dog dare your boss to let your dog come to work on Friday, June 21st (and every day, for that matter).

History of Take Your Dog to Work Day

Take Your Dog to Work Day was created back in 1999, making this year’s celebration the 21st annual event. The idea came to life thanks to Pet Sitters International (PSI) who wanted to recognize the amazing companionship of dogs. 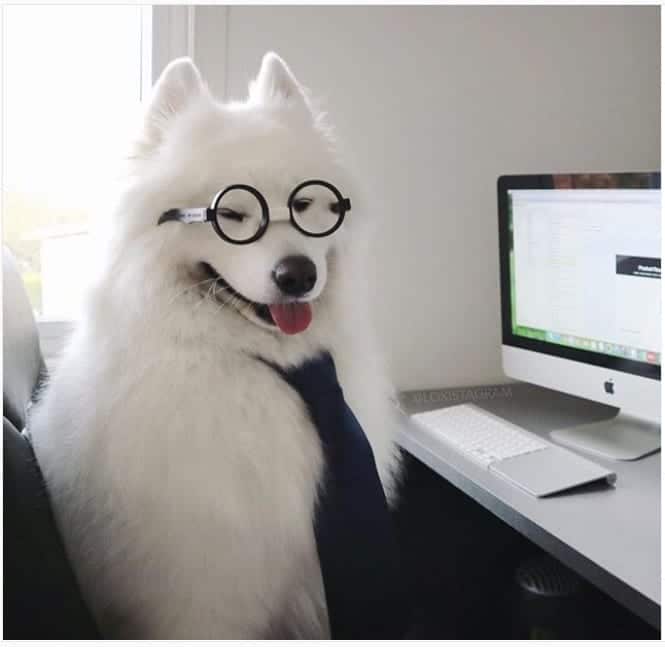 The holiday is also an opportunity to promote pet adoption. Holding this event in the workplace means others have the opportunity to experience the special bond formed between their coworkers and their dogs. The hope is they’ll be inspired to support their local pet communities or adopt a pup of their own.

What is National Dog Party Day?

Since National Dog Party Day falls on the same day as Take Your Dog to Work Day, it’s important we distinguish the two.

The holidays were created in conjunction, but National Dog Party Day is focused on expanding the celebration of our furry companions. If you’re unable to take your pup to the office, you can participate and promote pet adoption later in the day. 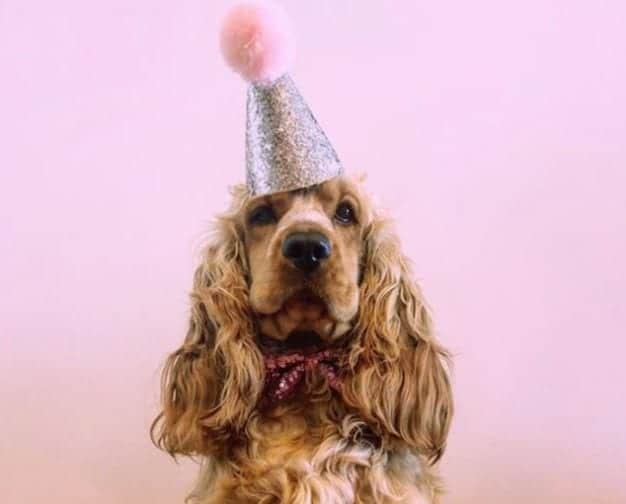 Celebrate the bond between you and your pup on June 21st and truly embody the phrase “Work like a dog and party like a pup.”

Let’s be honest: anything involving a dog is a party to us.

You don’t have to wait until June to recognize your pup – pet parents are always finding ways to celebrate their best pals. Get inspired by these adorable dog pawties that left us especially impressed: 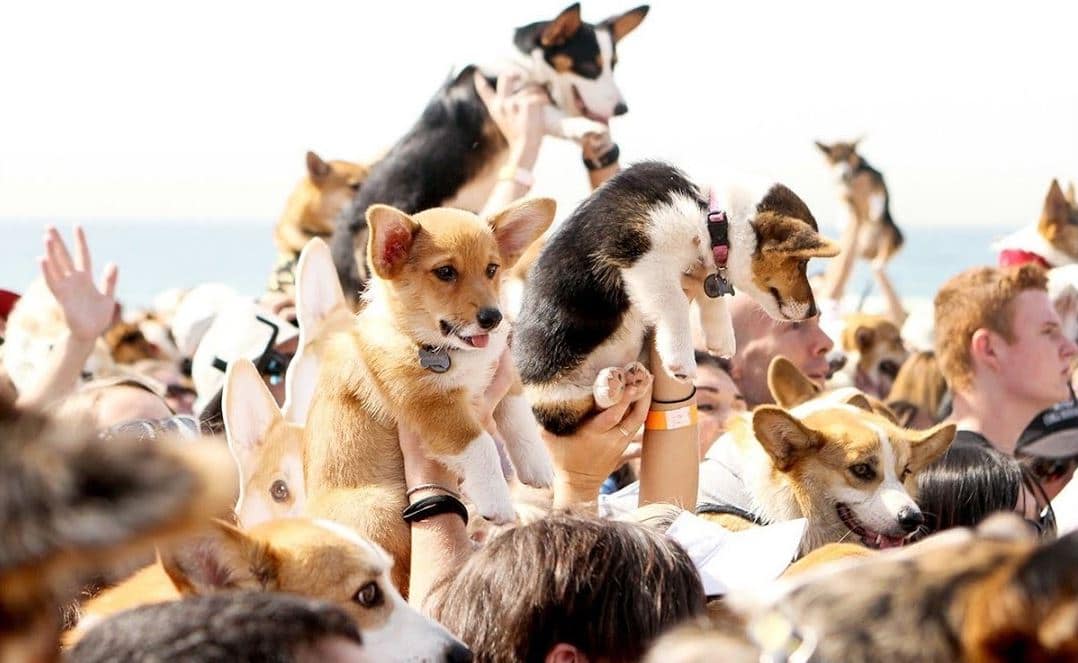 The event is described as having ‘Corgi-centric’ vendors, food, drink, carnival rides, and Corgi races. It’s been reported that the event has seen over 1,200 Corgis in attendance.

In other words: Corgi Beach Day is Heaven on Earth.

Huntington Beach seems to be the place for the best dog meetups in California. In October 2018, about 500 Golden Retrievers gathered in Huntington Beach for Goldie Palooza. 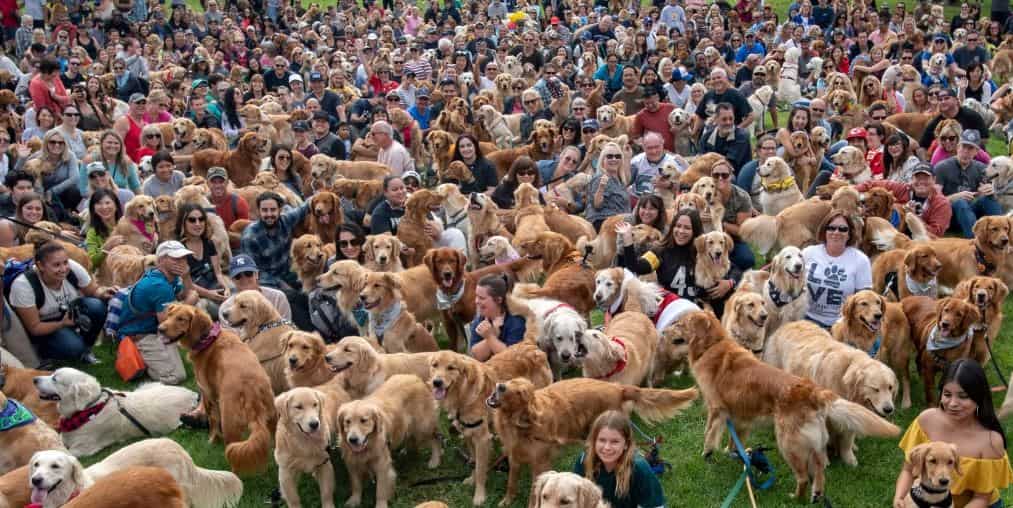 Goldie Palooza was a fun-filled day featuring a costume contest, Golden Retriever adoptions, and a “Smooch a Golden” kissing booth.

And of course, people and their pups smooshed together for a golden photo opportunity. 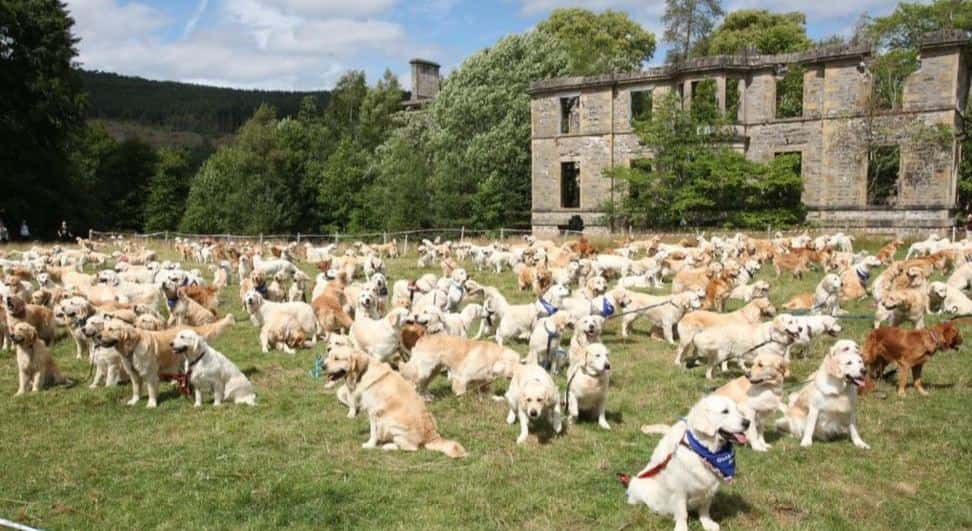 The event was organized by The Golden Retriever Club of Scotland to celebrate the 150th anniversary of the founding of the breed. We suspect many treats and kisses were given on that day.

Ask any pup in Minnesota their least favorite thing about winter and they’ll bark in agreement: the lack of walks!

Last year, the Rosedale Center in Roseville, MN decided to open early during the winter so pet parents could have a warm place to walk their dogs.

The idea was so appealing that about 300 dogs went to the mall the first weekend. Tres chic! 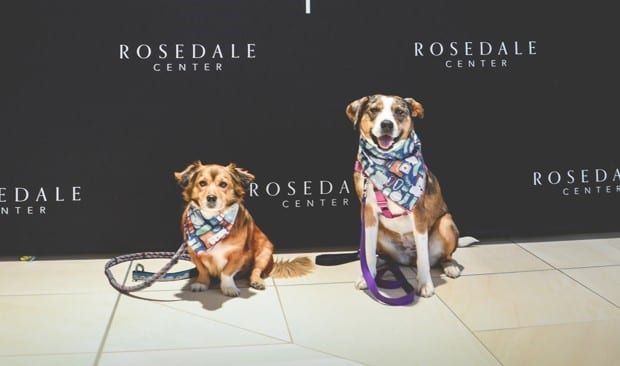 Seven Atlanta-area friends, with various types of doodles, formed That Dood Squad. The doodles and their parents meet at least once a month for brunch and mimosas (or treats and water) before photoshoots. 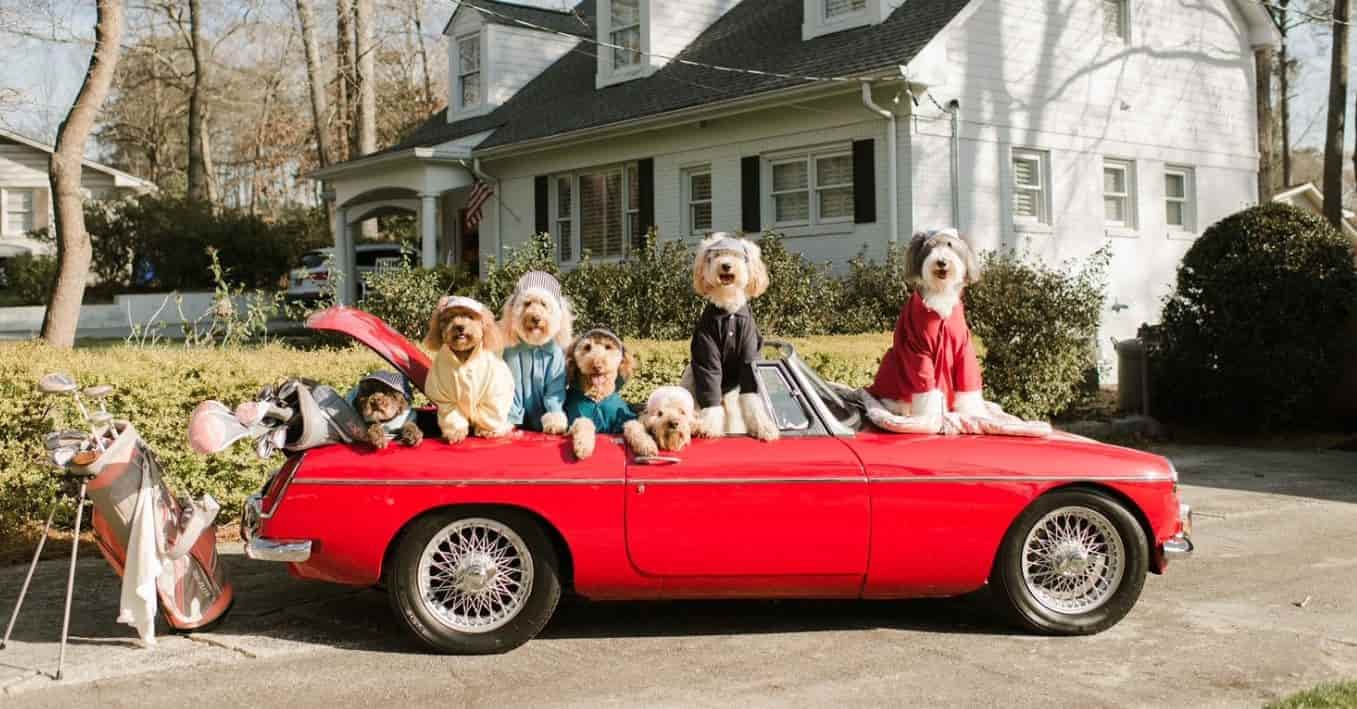 Being part of the group isn’t all glamour and fame; four of the seven pups are certified therapy dogs and visit hospitals, rehab centers, and senior living communities. 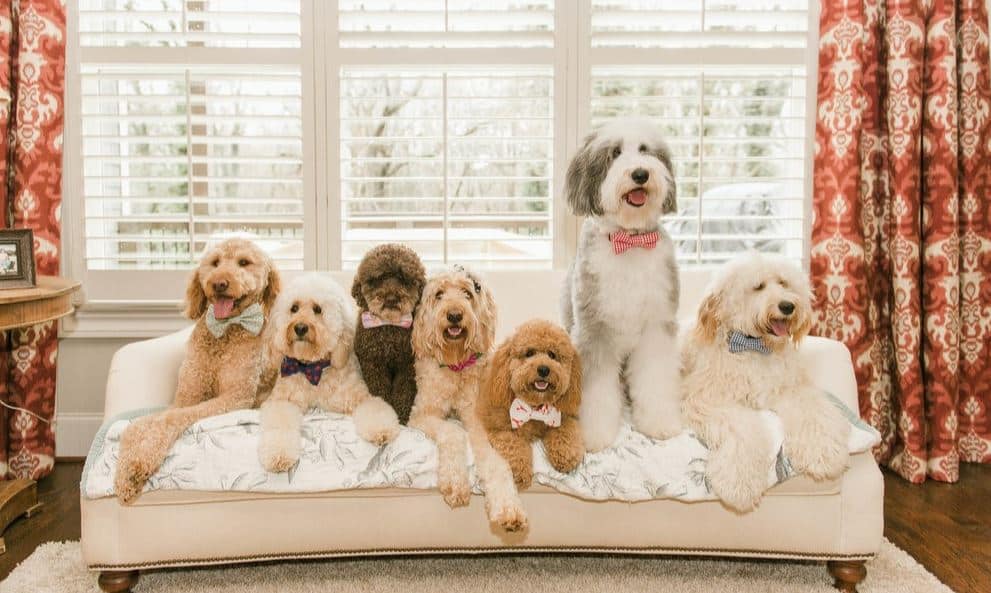 What’s more heartwarming than dogs supporting other dogs? In February 2018, pups of all breeds gathered at Derby Lane in St. Petersburg, FL to support the adoption of Greyhounds. 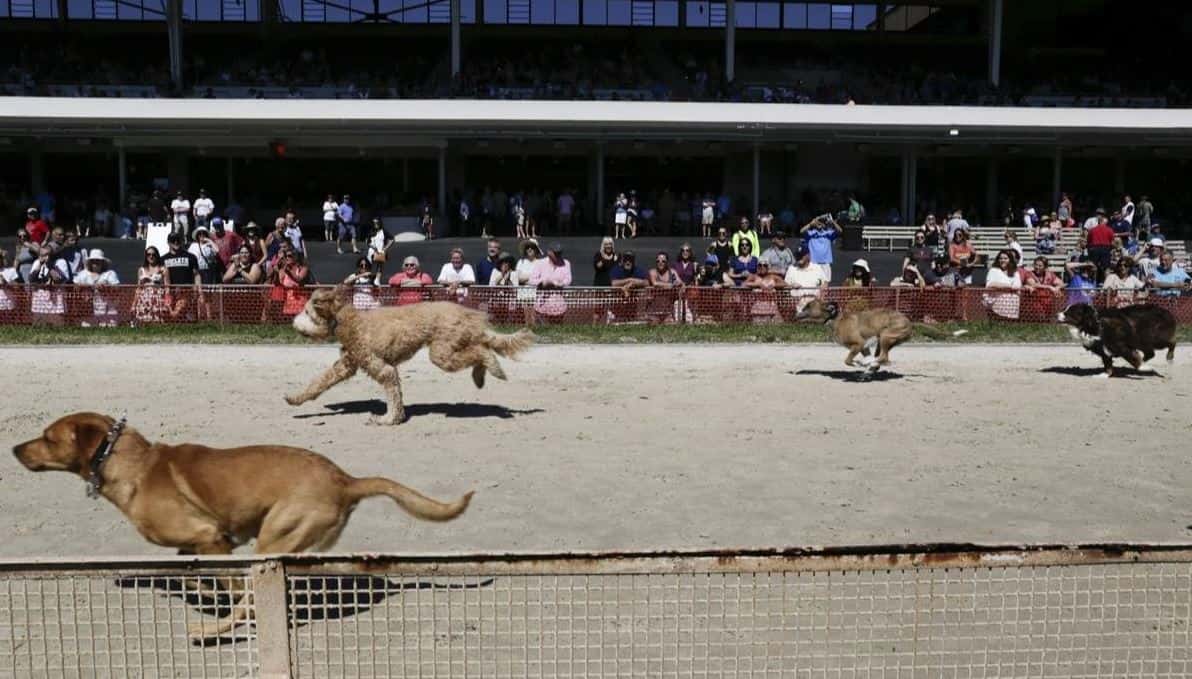 The event was a fundraiser for Greyhound Pets of America and 385 dogs lined up to race. While not every pup managed to finish the race (…or run in the right direction) it was still a great day for dog lovers. 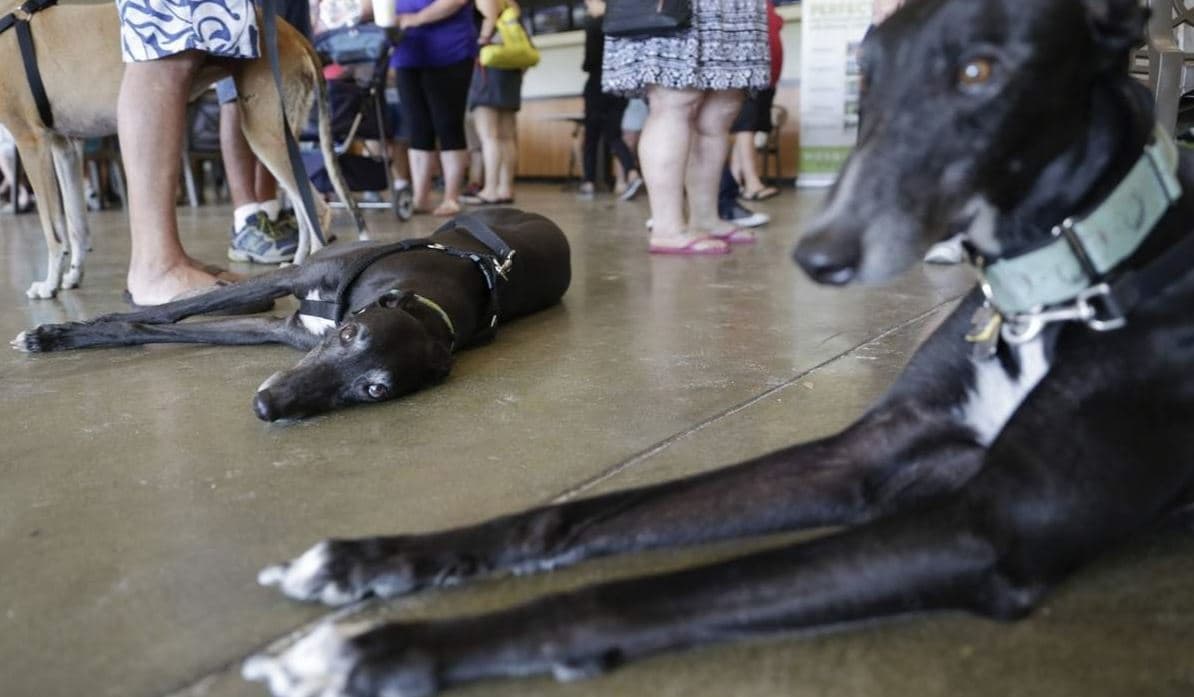 Celebrate with Your Dog

Are you wondering how you can make the most of June 21st with your pup?

The answer is easy: have them tag along to the office for Take Your Dog to Work Day then keep the festivities going after hours for National Dog Party Day. 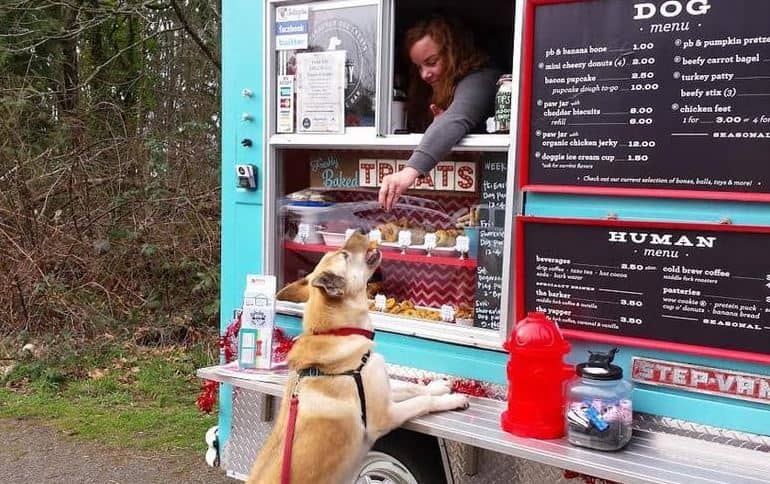 Enjoy the evening at a dog-friendly restaurant, spend some time at a dog park, and give tons of scratches behind your pup’s ears.

Oh, and throwing in a couple of treats can’t hurt. 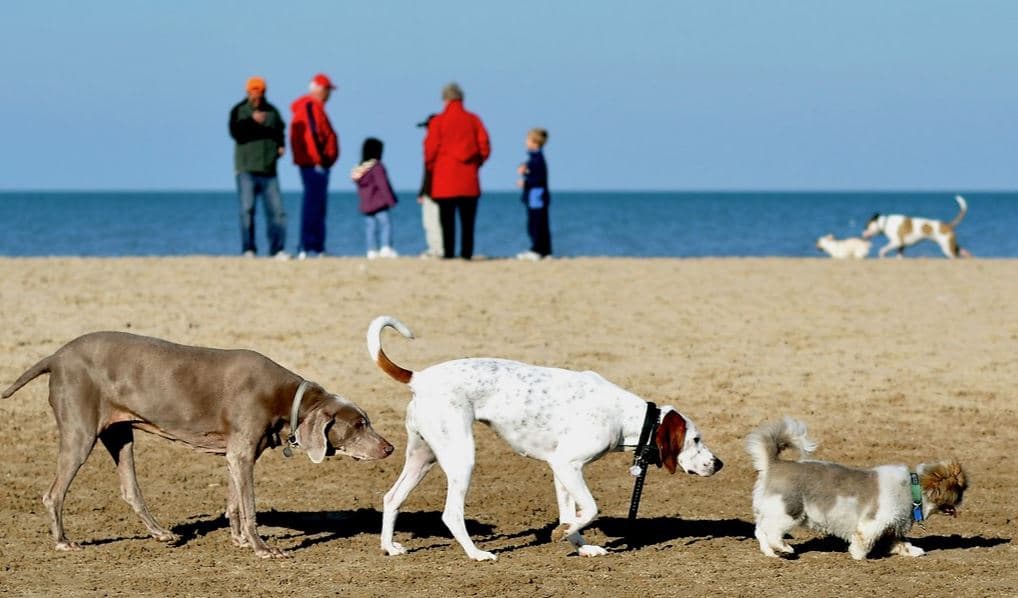