On the spectrum of animal lovers, we tend to see a distinct division between those who favor cats over dogs. The people who prefer felines usually think of cats as independent, mildly affectionate creatures that require low maintenance, and those who prefer canines love the extroverted energy and attention their furry friend brings. However, for animal lovers who are interested in a happy medium between the two species, breeds of cats that act like dogs might be something to consider.

Oftentimes, one’s pet choice says a lot about that person’s personality, yet ironically people and pets don’t always live up to their stereotypes. Some cats act like a dog more than they act like a cat. And with a simple YouTube search, you can find tons of supporting cat movies and videos showing cats swimming, playing fetch, and even obeying commands.

What Behaviors do Cats and Dogs have in Common?

Cats and dogs communicate through their body language. They use facial expressions, ear movements, tail positions, and vocals to express themselves. Cats and dogs also use their sense of smell to acquaint themselves with other animals and make sense of the world around them. Above all this, though, cats and dogs are two of the most desired pets worldwide because they share an innate desire and ability to form strong bonds with their human families.

Although both species share this innate ability to bond, we do find that traits such as playfulness, obedience, and communication are more prominent in dogs. As a result, this has created a niche for selectively bred cats that exhibit the ability to bond more intimately.

What is a Puppy Cat?

There’s a growing market for cats that act like dogs, and there’s a name for these pets too, puppy cats. This name refers to specific breeds of domestic cats with behavioral patterns that are resemblant of dogs.

Although uncommon, these dog-like tendencies are considered within the scope of feline behavior and have been enhanced through selective breeding. Some of these behaviors include:

While these characteristics might seem appealing for owners interacting with their cats, problems can occur. Felines that are too trusting and friendly are vulnerable to unpredictable dogs, people, and situations. Thus, we recommend using a wearable device to help track and identify your cat shall your feline go missing.

Although these dog-like characteristics can appear regardless of breed, some breeds are more prone to these behaviors. You can find these cats through breeders or if you’re lucky enough, through a rescue shelter. So, let’s go over our list of the top ten cat breeds that act like dogs.

Did you know microchipped cats are reunited 38.5% of the time, compared to 1.8% if not microchipped? Consider getting your cat chipped today.

The cultural assumption that cats are distant pets that lack affection compared to dogs is not as black and white as we think. Animals develop individual characteristics based on their environment and interactions with people. However, due to selective breeding, many of the following breeds develop a proclivity for close and frequent human contact. 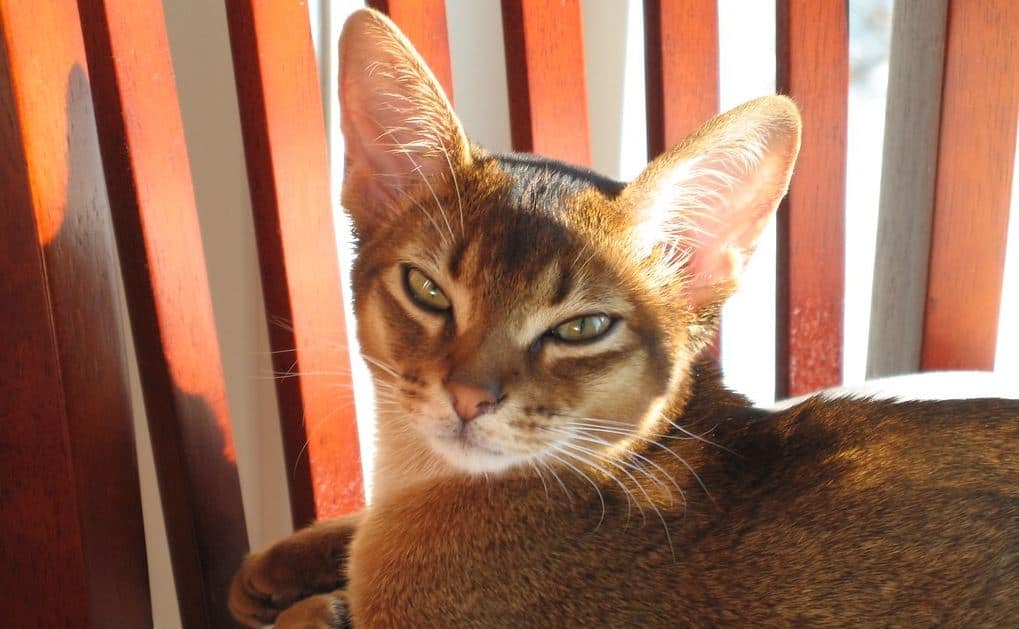 Abyssinian cats are a loyal, engaging breed that loves the water and playing fetch with its favorite toys. These cats are very social and so they require more attention than most of the other domestic cat breeds. If left isolated for too long they can become depressed, so consider the amount of time you can afford to invest in your feline friend.

Abyssinians respond well to leash training and they also enjoy following their owners around everywhere they go. This makes them an excellent breed for those who enjoy a brisk walk every now and then. A unique behavior seen with Abyssinians is they’ll often climb upon their owners and perch upon their bodies to lookout. 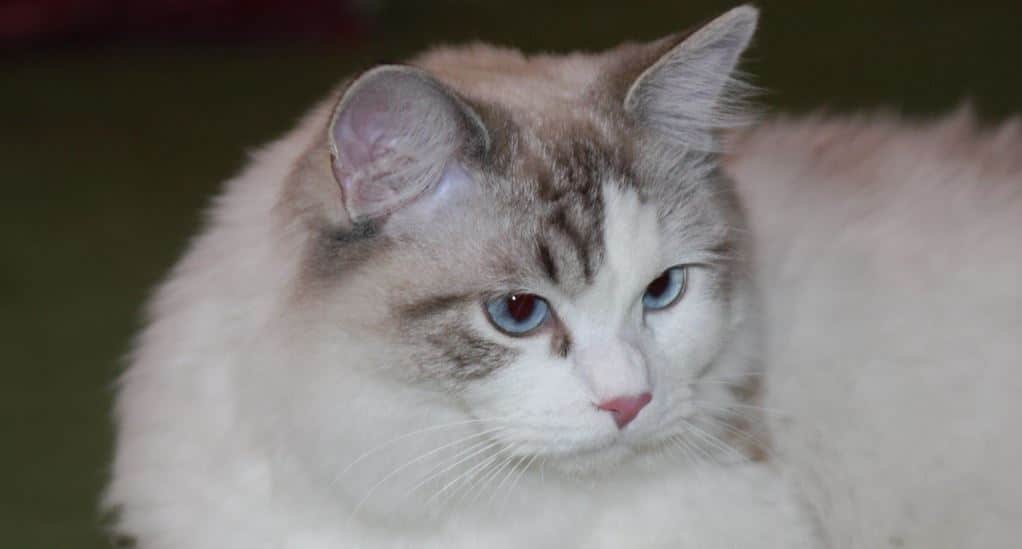 Ragdolls are one of the more common breeds of cats that act like dogs. They’ve earned the name ragdoll for their tendency to go limp and rest in a doll-like, bent position when picked up. This is a calm, mellow-temperament breed that is often seeking physical affection from owners.

Ragdolls acclimate well to their environments, and they get along with children and other pets in the house too. They’re a great indoor cat breed similar to dogs for the fact that they enjoy lap-time and greeting their owners at the door.

The Manx breed is unique in its dog-like tendency to come when their owners whistle or call their name. Manx’s are a rare cat breed, not only because they’re tailless, but also because they truly like people.

These cats have an endless supply of affection for humans. They’re also notorious for jumping, climbing obstacles, and even collecting and burying toys at times. These cats are very responsive to their owners. Manx’s can be trained to learn commands like “no” or “come”, just like a well-behaved dog. 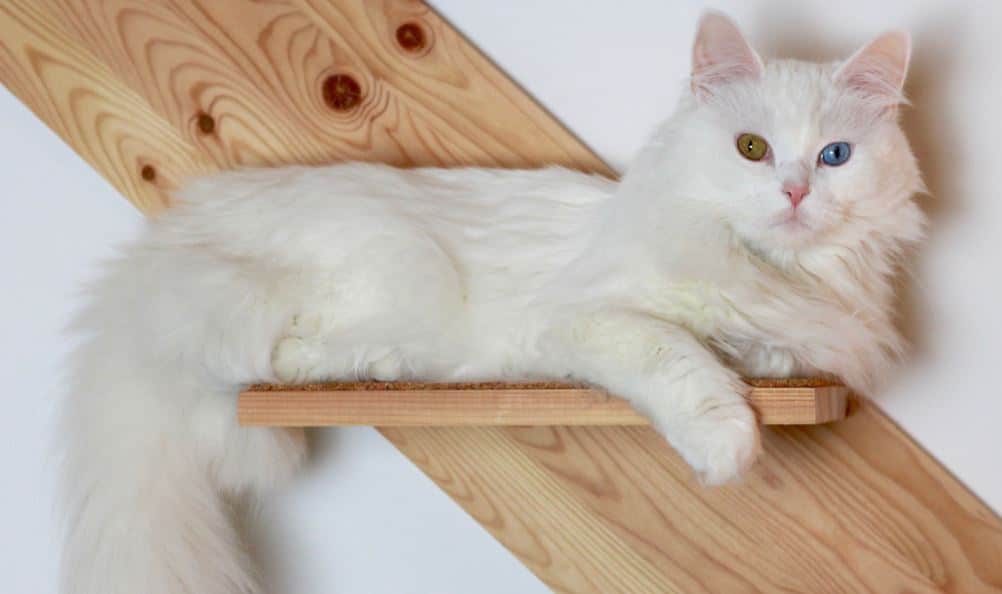 If this breed were to be summed up in just a few words, it would be clever, devoted and social. Turkish Angoras are loyal to their families and take every chance possible involve themselves in whatever you’re doing.

A unique trait about this breed is they enjoy swimming- on their own terms, of course. Turkish Angoras are playful, mischievous, and determined, making them well suited for a home with lots of activity. Like most dog breeds, this cat breed adores children and adults, making them a great family pet. 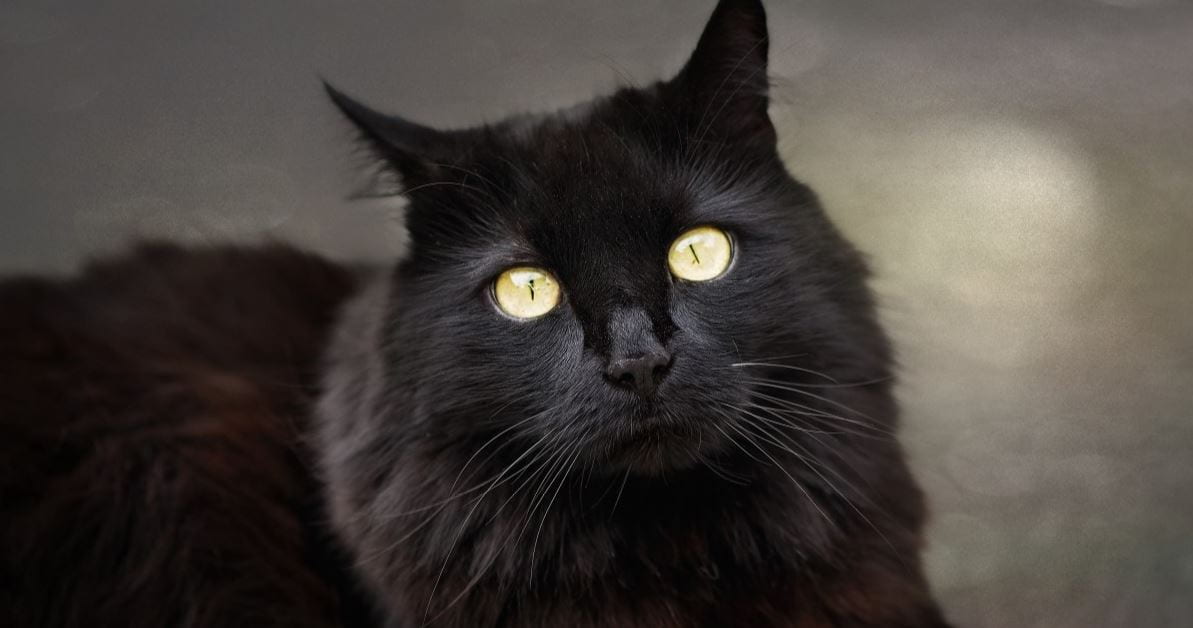 The Bombay is another common cat breed that acts like a dog. They’ve been spotted on sidewalks and parks walking on a leash with an owner.

Bombay cats are also infamous for finding new ways to entertain themselves. This means they get along great with dogs and can be seen teasing them from time-to-time. Like most of the other breeds of cats that act like dogs, the Bombay loves showing and receiving affection, making them a fantastic choice for those who love a playful and interactive pet. 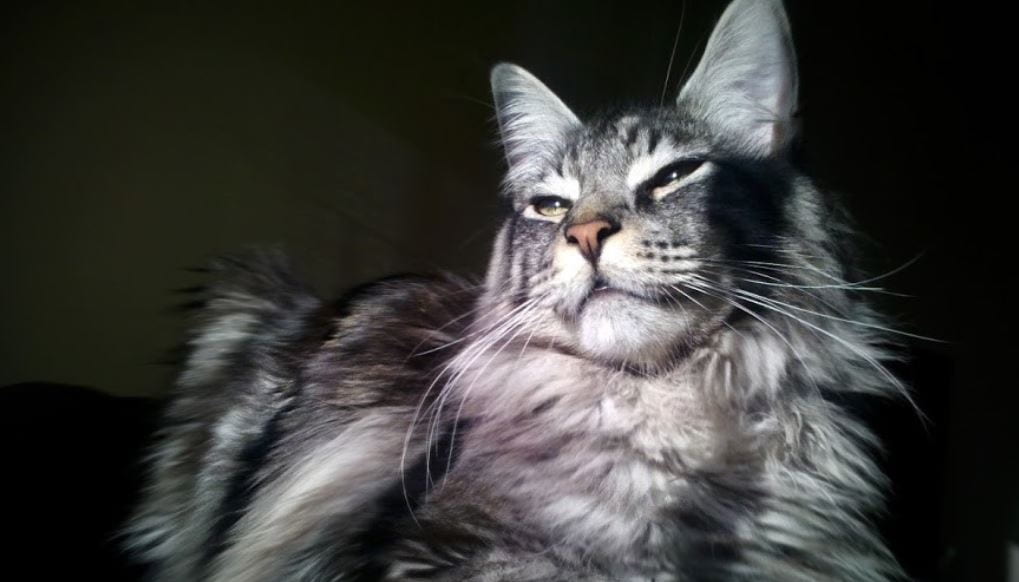 The Maine Coon is one of the largest domestic cat breeds. Males weigh between 12-18 pounds, with females coming in between 10-14 pounds, making them as large as many toy-sized dog breeds. Not only is their size similar to that of dogs, but so is their larger-than-life personality.

Maine Coons are loyal, loving, and playful to their owners. Because of their loyalty, they stay cautious towards strangers, which can be a good thing for their safety. Much like a long-haired dog, this breed requires regular brushing to keep their thick coats free of mats. 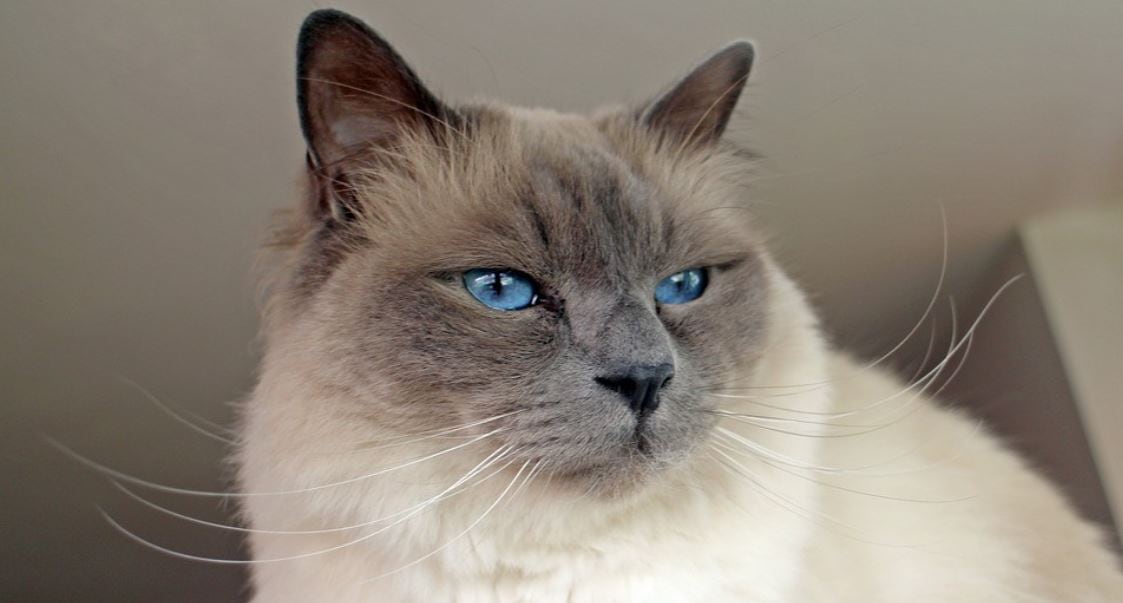 The Birman is a fun companion that enjoys being playful when you want quiet time and obtrusive when you’re busy. Although they can be described as what one would imagine having a younger brother to be like, the Birman does have a gentle nature and sweet disposition.

Birman’s do well with children, and they love to receive and give loads of affection. This breed is easy to handle and care for, making them a good show cat. Much like a dog, they pay attention to commands and can be trained to behave. This makes the Birman is an ideal cat breed for devoted dog lovers. 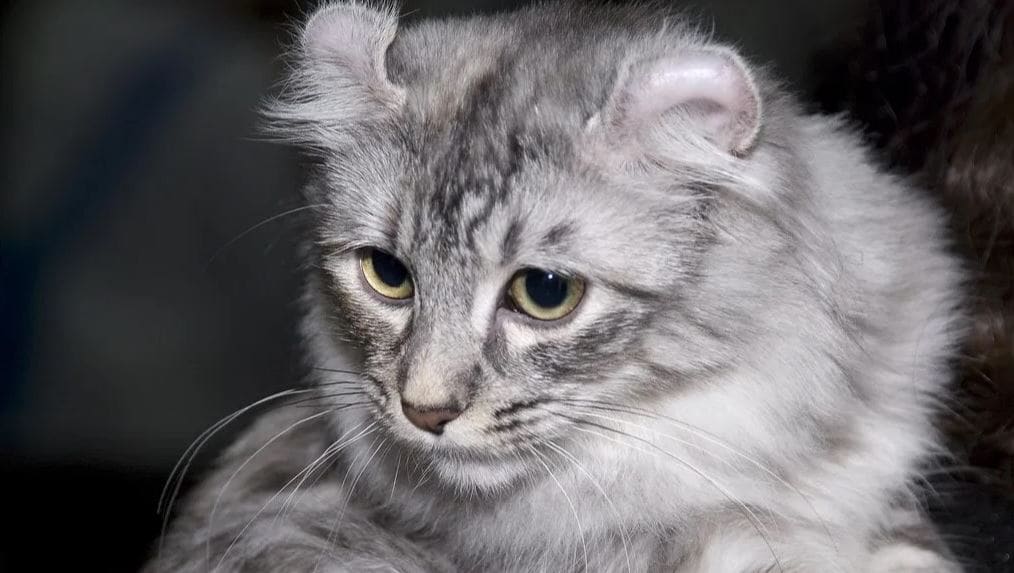 Identified by their unique, curled back ears, the American Curl is also distinguished by its affectionate nature and empathy for children. They’re a playful and energetic cat breed that loves to explore its environment. American Curls have been known to have a dog-like attentiveness, and are usually found perched up high studying their owners every move.

The curls can change dramatically during the first few months of its life, so it’s recommended not to bring one home until they’re at least four months old. After this time, the curl of the ear settles into the form it will keep throughout its life. 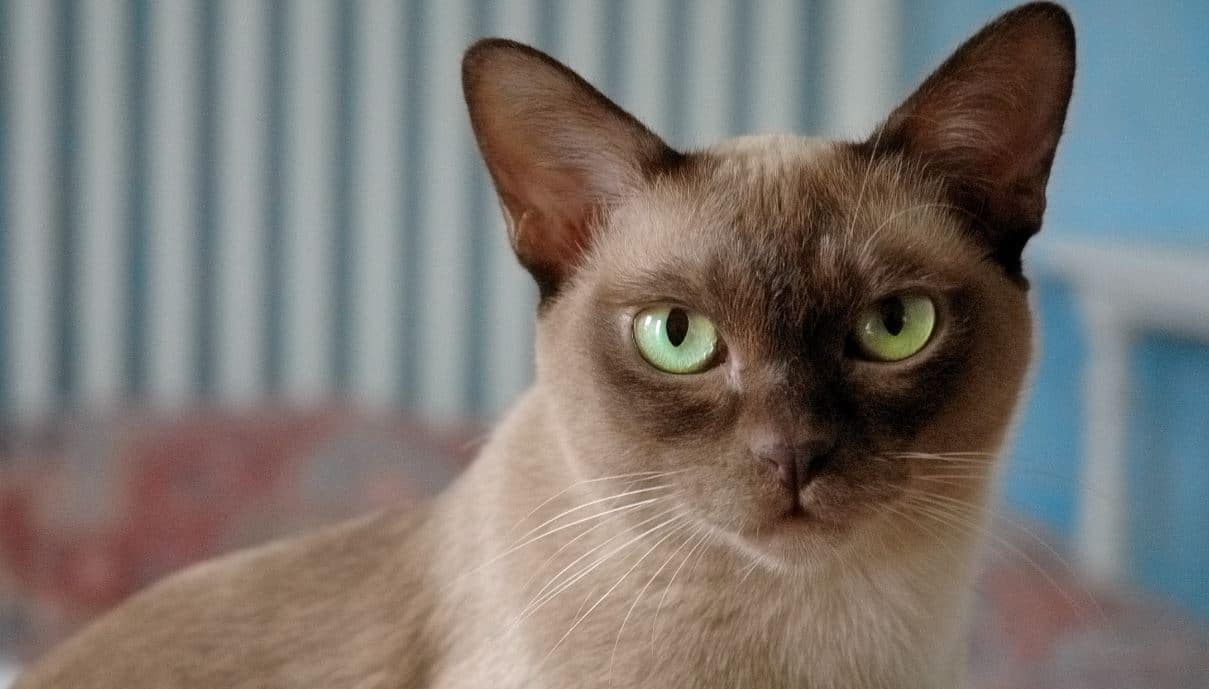 Here’s another unique cat that acts like a dog, the Burmese. This breed is known for displaying dog-like loyalty, as seen in the Abyssinian breed. Both breeds also share the combination of high intelligence and a tendency to follow their owner’s every move. This makes the Burmese a practical cat for leash training since they already like to be close.

Unlike many other breeds, the Burmese are a lot more vocal. They’re often heard trying to have a meowing debate with their owner over why they deserve treats – again. Burmese cats are very active, and they’ll demand play time from you when they feel like it. This makes them a fabulous choice for pet owners with an active puppy too. Burmese cats develop a dependency on their owners, so be sure you have a cat-loving sitter for when you’re away. 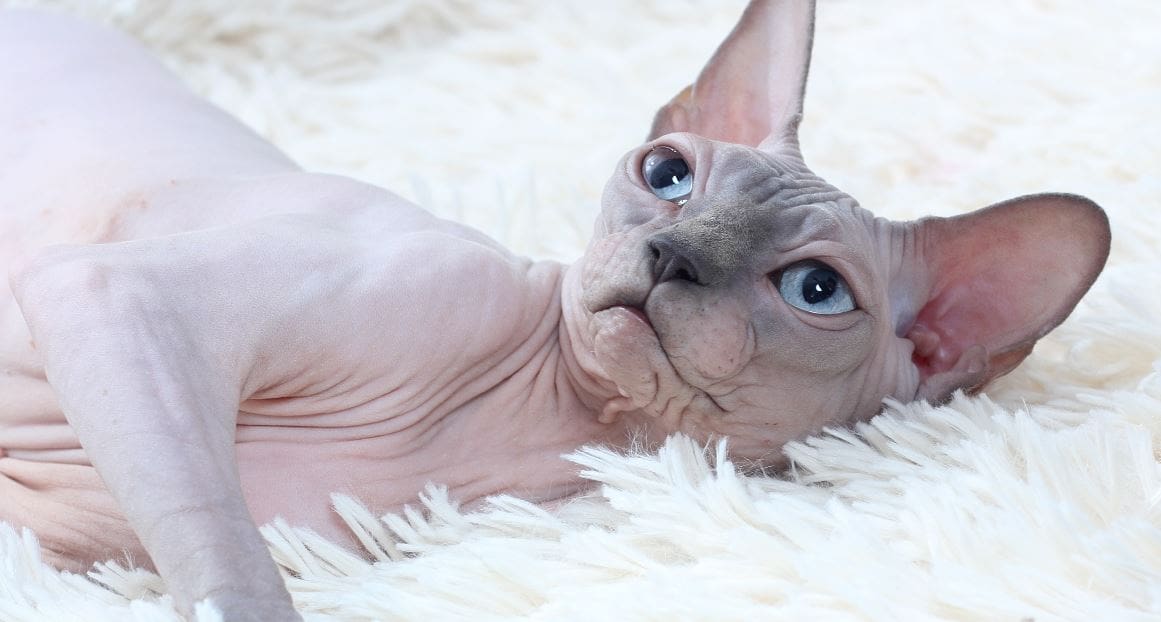 Arguably one of the most unique-looking cats of the feline family, Sphynx’s are a rambunctious, loyal, and loving breed. They’re notorious for following their owners around everywhere or found snuggling underneath a soft blanket for hours.

Sphinxes have an extroverted personality making them a popular cat breed among American families. To an untrained eye, Sphynx cats appear completely hairless, however most of its skin is covered with a fine layer of peach-fuzz that gives it a soft texture. To your surprise, your hand will glide easily over its body. However, because of its lack of hair, Sphinx’s are susceptible to skin irritations and temperature fluctuations. This means you must bathe them regularly, use sunscreen, and provide warm, soft clothes for them when it’s cold outside.

Is Training my Cat to Act like a Dog Possible?

Cats are intelligent creatures, and their behaviors can be influenced with patience and training. Many people have taught their cats how to perform tricks, fetch toys, and even listen to commands like “come here”. Felines will also quickly learn to associate a specific behavior with the sound of a clicker. Since cat behavior is so malleable at a young age, many people wait until adopt a shelter cat month to find their next dog-like cat.

According to behavioral biologist, Karen Pryor, she states, “For today’s city cats, often living out their entire lives confined indoors, clicker training can provide valuable mental and physical stimulation; it enriches the cat’s life and can help the cat to be healthier, happier and a more responsive companion.”

Whether you’re in the market for a dog, or a cat that acts like a dog, takes the steps necessary to ensure a long and healthy life for your new friend. Cat insurance get provide your furry friend coverage in case of an accident or illness. Get a free Prudent Pet quote today!